In the wake of Hurricane Sandy, some people might have forgotten the dangers inherent in other natural phenomena. Volcanoes, often relegated to fantasy books and memories of exotic locales, are important geological case studies, and Discovery Channel is turning its ever inspecting eye on the fiery mountains. 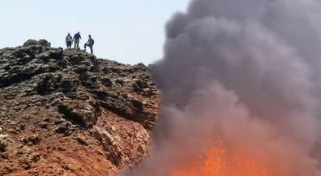 Curiosity, the documentary series that airs Sundays at 9 p.m., will broadcast “Volcano Time Bomb” on Dec. 9. Experts on the program talk about the most volatile volcanoes in the world and how communities may face unprecedented destruction.

Recently, Hollywood Soapbox exchanged emails with Dr. Andrew McGonigle, reader in volcano remote sensing at the University of Sheffield. McGonigle is interviewed on the one-hour special. Answers have been slightly edited.

In your opinion, is it possible to predict volcanic activity and eruptions? Could there be an effective early warning system one day?

The capacity to understand volcanic activity is expanding enormously and with every new eruption we learn something new about how the Earth works, with beneficial impacts upon our ability to predict eruptions. There have been some great examples of success in this regard: for instance a few days before the largest recent eruption, Mt. Pinatubo in 1991, an evacuation order was given, which saved many thousands of lives.

Likewise, technological advancements are enabling us to resolve what is going on beneath the ground far more clearly than before, showing great promise for effective early warning systems. A real key is the ability to piece together the different pieces of the puzzle, for instance, in measuring the earthquakes from volcanoes, the gases which are released from summit craters and the deformation of the ground in response to magma movements. We are getting much better now at integrating these different sources of information, to provide a far more robust assessment of the volcano’s status than possible from the individual data sources in isolation.

Is enough of the world tuned into the dangers caused by volcanoes?

This is a great question. We tend to be so preoccupied by our immediate concerns, that further away or less frequent phenomena drift off our radar screens. In many parts of the world, for instance Indonesia, or of course Hawaii and the Cascades in the USA, volcanic eruptions are frequent, or at least not too infrequent, events so people are mindful of them and of the various perils and inconveniences that they cause.

However, for those of us who live in more geologically tranquil locations, for instance in the UK, volcanoes seem a world away. Hence, the Icelandic eruption of 2010, with all the flight chaos it caused, was a rude awakening indeed to the fact that we live on a geologically active world! This event also revealed, to a certain degree, a lack of preparedness amongst civil authorities to cope with what, volcanically, was a relatively benign eruption. Hence we do need to be more aware of these kinds of events, and the far off effects they can have, and to plan in advance appropriate measures, for what we will do when they occur.

From your experience, what are some of the most volatile volcanoes in the world, and why?

My own work has taken me to some fairly volatile spots. Stromboli in Italy is a spectacular example of a volcano venting its fury, in explosions every 10 or so minutes. This is dubbed the lighthouse of the Mediterranean for these metronomic outbursts which have generated a natural firework show for at least the last few thousand years. I still find it truly awesome to think of the Greek and Roman mariners who witnessed the same sight in their sea passages during bygone millennia.

Vesuvius is currently inactive, but bursts into life sporadically and has every potential to repeat the level of violence associated with the AD 79 eruption that led to the fall of Pompeii. This is particularly troubling given the heavily congested population within the surrounding bay of Naples region. Finally, other volcanic targets show signs of resumed life: Krakatoa in Indonesia, which erupted catastrophically in 1883, has recently resumed low level activity; and Santorini in Greece has experienced earthquakes indicating restless subsurface magmas. During the 16th century BC this latter island volcano literally blew itself apart, collapsing into the sea, possibly leading to the origin of the Atlantis myth.

How did you get involved in this field? Is it dangerous, especially when working on site?

I started out doing a doctorate in lab physics where I designed sensors for monitoring pollutants in the atmosphere. I then took a research job using similar techniques but for measuring gas releases from volcanoes in order to understand the underground workings of volcanic systems. Somewhere along the line I became a volcanologist and started being able to tell people about what I did for a living at parties without them falling asleep!

The transition from working in a controlled laboratory environment to doing research on volcanoes, a tiny speck, clambering over these geological powerhouses, was also enormous, and never ceases to be exhilarating. This of course brings with it an element of danger, and one must always have a profound sense of respect for the force of nature. In this sense we are always careful to take every precaution, and certainly wouldn’t access craters during explosive episodes. Two days before the filming of the Discovery documentary we were showered in rock fragments from an explosion whilst working on the summit of Mt. Etna; that was our cue that our work was finished for that day.

Were you impressed by Discovery’s special? Why are TV programs like this important for understanding volcanoes?

I really enjoyed the documentary, and it was great to see a number of my colleagues from other countries also featuring on the program. I think the use of computer animations was brilliant in conveying eruptive processes, and it was great to see my colleague Ken Sims “climbing” down into the innards of a volcano with a little help from the special effects team. This was so realistic in fact, that I had to spend quite a long time afterwards explaining to my 5-year-old son that it wasn’t “real,” and that I couldn’t take him down to see a magma chamber next time I am on a volcano!

Scientific documentaries can now be as visually appealing as feature films in terms of their animation and some of this documentary’s computer generated pyrotechnics brought to mind volcanic scenes from the Lord of the Rings and Star Wars films.

In terms of the role that TV programs play in disseminating scientific knowledge, this is really important, and has a massive effect on public understanding (or misunderstanding!). It is really challenging to deliver factual programming which really captures the attention of viewers, while remaining true to the nuances of the science in question. However, in the case of this documentary, I think a good balance was struck: after all, it is hard to overplay what volcanoes are capable of doing!