Perhaps it is due to more frequent natural disasters, but the potential deadly impact of volcanoes is something that is frequently forgotten about when it comes to the average American. After all, it has been decades since Mt. St. Helens erupted in Washington, and in the span of time most of our attention has been diverted to fending off earthquakes and hurricanes. 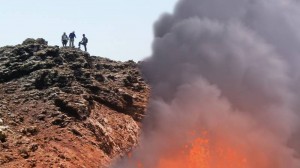 However, some of this thinking may change for those who watch the latest “Curiosity” special “Volcano Time Bomb” on Sunday night, as it provides a series of harrowing reminders that there is still not only serious danger out there within populated regions of the world, but that these eruptions can destroy whole cities without the proper amount of caution exercised.

Is there any surefire way to prevent an eruption from happening? No, and as the title suggests, what we are generally looking at here is just a waiting game until the next one comes. However, there are ways to minimize the impact of and loss of life, and we see through this just what many brave scientists are doing at the moment to learn how to detect possible eruptions in their early stages, whether it be by surveying the land, reading vibrations underneath the surface, or detecting levels of CO2 in soil that can only be caused by magma. For those familiar with volcanoes already, this special may not teach you too much beyond what is already in your knowledge base, but what it does is present all of its information in a detailed, stunning format that includes both real and simulated footage of eruptions. No network produces a better visual way in which to display the information.

With some of these “Curiosity” specials this year, we have left wondering to ourselves a series of key questions, whether it be how effective the ancient Egyptian mummifcations were as a practice of preservation or whether a human being can really be hypnotized to commit a deadly act. With “Volcano Time Bomb,” you are getting something that is a little more informative and a little less open to debate. It is common knowledge that that eruptions are dangerous; the only thing that is surprising is how they continue to shy away from the forefront of public consciousness.