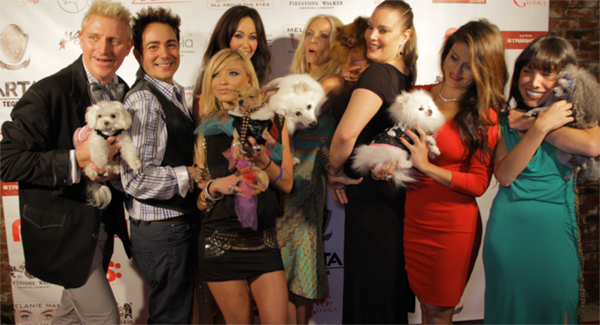 Synopsis – Five women and a gay couple from the affluent world of Bel-Air are all seeking the limelight. And they think they’ve found the answer to their ambitions: the fifty billion dollar pet industry. Our ambitious cast attempt to turn their cute pooches into pet celebrities, via commercials, TV shows, magazine covers, and doggie products.

The exclusive canine world we enter is a unique and fascinating subculture but in the series it is simply the catalyst to get inside the lives and minds of the cast. Over the coming seasons we’ll follow these adoring ‘moms’ as they focus all their attentions on their little micro-bitches. They might weigh less than a few pounds but potentially they can return fortunes.

We follow our six main characters as their lives unfold – for good and for bad. Each of the ‘moms’ has ‘her’ own story. They all have skeletons, they all have egos, and their personalities match their ambitions. The whole cast is in competition with each other. They attend the same events and the same auditions all wanting to be top dog. So they fight, cheat, and do whatever it takes to win.

There’s drama at every turn from the ensemble cast – Dazza, the master of manipulation, Tanya, the over-zealous drama queen, Marisa, the sexually confused trust fund beauty, Patrik & Pol, the protective gay ‘moms’, and Melanie, the society girl with plenty to hide.

The key to this show is the drama and the comedy surrounding these characters and their pampered pooches. We’ll meet them at the exclusive Hollywood canine clubs, the groomers, the dog hotels, at events like Yappy Hour, Bark-mitsva’s, therapy class, and doggie yoga.

They fight, they snarl, they bite …and they delight …cos there’s never a dull moment with The Bitches of Bel-Air.